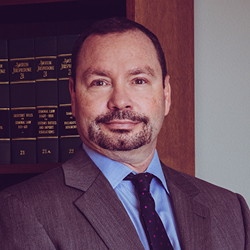 Mr. Robinson has been practicing law in the State of Utah since 1995.  He has been in private practice for his entire career, dedicated to civil and criminal litigation.  Mr. Robinson has litigated almost every kind of criminal case in the State of Utah, including a First Degree Murder case that resulted in a jury acquittal. He has written articles for Utah Business Magazine.

Mr. Robinson is married and when not working, he loves to spend time with his wife and three children. Mr. Robinson enjoys traveling, riding motorcycles, skiing, all sports, and outdoor activities.

We offer a no-obligation consultation for you to discuss the details of your case openly. Use the online contact form or call 801-266-7414 to meet with the firm's highly qualified Utah criminal defense and malpractice attorneys. The firm is located in Salt Lake City at 5788 South 900 East, and represents clients in northern Utah. Our track record is evidence of our ability to produce positive results in high-pressure situations.